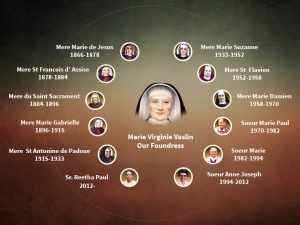 Born April 28, 1820, she lost her older sister vary early in life, followed by the death of his mother in 1830. His father remarried and when her half-sister Mary Anne was born Virginia had already left home . She began working as a shepherdess for Ms. Dagoreau farm to Louptiere. Being young and weak that amiable lady hosted him in his castle and took great care of him. This act of kindness gave Virginia the idea first “to others what was done to him.”

At Louptiere, Virginia acquired the qualities of a housewife and cook. She also learned to care for and to decorate the altars, the first lessons of the liturgy and to mend and iron ornaments.

When she was 19, Mary Virginia chose to join the Sisters of Providence of the Sacred heart of Jesus, drawn by their poverty and informed by a strong devotion to the Sacred Heart of Jesus. This contemplative congregation later became an active dedicating themselves to care for the poor and the rich. Sister Providence, as Virginia was known in religious life, was given to the Department of Nursing. This rather dramatic change in lifestyle caused him to reflect on his vocation was for a community life in prayer and charity. Thus, she returned in May 1845, once again, being known as Mary Virginia.

The opportunity to supervise a class for Refugees convent good Tours pastor brought her in contact with other girls who also faces great difficulties and sad experiences. Here she often prayed before the statue of Our Lady of Miracles, and it is also here that, during a terrible illness, she showed the way “she had to follow the work she be undertaken for the salvation of souls. ”

This vision received in the Petit St. Gatien hospital held a tight secret until p. Gautier, a missionary of the Congregation of the Holy Cross, guided by an inner light sought Mary Virginia and confronted him details she had seen and heard in Tours. He told her it was not a dream but a question of salvation of souls.

With the greatest humility, she accepted the way Fr. Gautier traced for it, an action plan and apostolate to the small world of the servants of the house staff and decided to implement the project in Blois, a town castle and castles on the Loire.

In the mid-nineteenth century, the condition of the domestic life in France was miserable and this attracted the attention of Virginia who wishes to help the servants come to a place where they felt wanted and supported especially in days of distress.

With only 5 francs in his pocket, she rented an attic room in Blois, in an old fortified house of mud. His only comfort was more homeless girls who asked to share his home. The first companions of Mary Virginia were enthusiastic and even with no finances, they were loyal to him and gave him their services.

They also allowed to provide this dwelling place by bringing the rejected items from their workplaces. They started calling as SR. Virginia and she wanted to turn to their sister and servant of the servants. She gave the example of the first to be anything – it increases the morning or when in trouble, giving the servants sincere advice, hard work, faith and devotion. She committed herself to work or took care to find work for its protected in Christian families. As the number of domestic rose, she was forced to look for another home.

In September 1853 Ms. Marie Emelie Crosnier joined Virginia in his mission as also Julie Ribouleau. A penniless existence with several girls caused many tongues to wag and Blois bishop reprimanded him for his manners. But his unwavering faith won him support, she continued in her new found project. She relied on friends like Rev.Fr. Gaubert and Mr Venot Secretary of the bishop, who was an encouragement.

Occasionally, she sought audience with Fr. Gautier Le Mans, which allowed him to open a community in Le Mans. Very poor, Mary Virginia and Julie move to an empty, dilapidated house. With only two francs and nothing they scrape and expand their aid mission; ing domestic workers.

March 25, 1856, Marie and Emilie Virginia Crosnier make their way to the house of the Bishop of Blois and in his presence and that of Mr. Venot dedicate themselves to God and to poverty, chastity and obedience. They officially receive the name “Servants of Mary” a name that was given to them at Le Mans and also indicates that the role that we accept in the congregation – “to be a servant of servants.” Thus begins the journey of a young able, bold, who owned nothing and whose only purpose was to give poor girls of his time who were fighting in a dignified life.

Entering the Franciscan order, was for Mary Virginia then the result of a well-maintained project quite accustomed to finding safety in poverty, it is comfortable in a lifestyle according the spirit of the “Poverello”. A new life, a new name, Mary Virginia took the name of Marie St. Clare and continued as Superior General until October 1866 when he was elected SR Mary of Jesus as the new Superior General Mother Mary and St. Clare’s promises obedience.

She hoped that the Congregation owned no property and follow the footsteps of St. Francis: “live as pilgrims to be ill-in for the father’s house to which we must return and to radiate peace along our path “.

Health problems and tired, it offers the Lord his terrible suffering for those she had stopped to help and comfort during his life. It draws its strength from Chapelle-Gaugain where she attended the Mass everyday. Forced to return to Blois, she spend the rest of his days preparing itself to state to him who called HER TO SERVE. Surrounded by the affection of her sisters, she slept in the peace of the Lord October 10, 1873.

With St. Francis of Assisi, it echoes the words, “I have done my part, maybe the Lord will teach you yours.” The congregation continued to grow and spread in the world of branches with many more homes that is open not only in Mary Virginia during his time, but later, to serve society in the areas of health, education, skills development, social services and pastoral ministries.

The best features of his life: a living faith, a humility quite ordinary and resolute will live on among her sisters who take his message forward in the many activities that engage them.of women committed to living the Gospel in fellowship with all creatures,